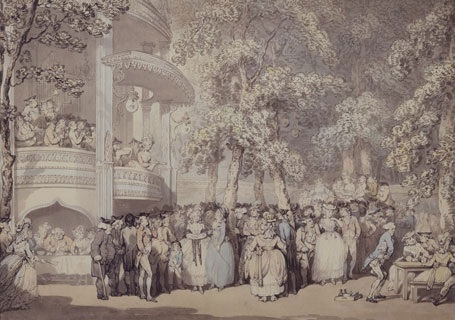 The satirical watercolorist Thomas Rowlandson captures both the refinement and the lasciviousness of the gardens in his depiction of recognizable figures taking in a musical performance. Dining in the supperbox at the left are the literary figures Oliver Goldsmith, Samuel Johnson, Mrs. Thrale (later Piozzi after she scandalously married an Italian violinist), and James Boswell, who wrote of Vauxhall in his Life of Johnson: “It is peculiarly adapted to the taste of the English nation, there being a mixture of curious shew, — gay exhibition, — musick, vocal and instrumental, not too refined for the general ear.” At the center of the picture, the Duchess of Devonshire, accompanied by her sister, gazes up at the orchestra, herself the object of attention of a number of surrounding men. To the right, the Prince of Wales whispers in the ear of his former lover, Mrs. “Perdita” Robinson, on the arm of her husband. Beyond them at a table sits a famous madam, “The Old Bawd of Sutton Street, Soho.” Visible in the gallery of the orchestra pavilion is the singer Mrs. Weichsel, who was Rowlandson’s next-door neighbor; next to her is the composer James Hook, who wrote many of the songs performed at Vauxhall.