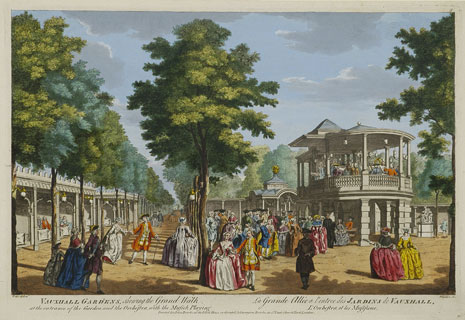 Visible in the four contemporary views of Vauxhall displayed here are many of Jonathan Tyers’s improvements to the gardens. These included the “Chinese” or “Gothic” orchestra building, the statue of Handel by Roubiliac, a number of triumphal arches spanning the garden’s Italian walks, and the series of arcades housing supperboxes. Also visible are a number of trompe l’oeil landscape paintings that extended the vistas at the ends of the walks. The engravings demonstrate the highly theatrical setting of the gardens, where the public was as much on display as the performers. 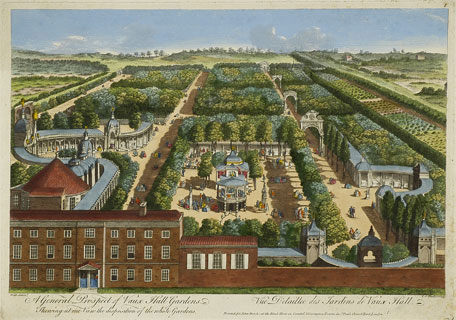 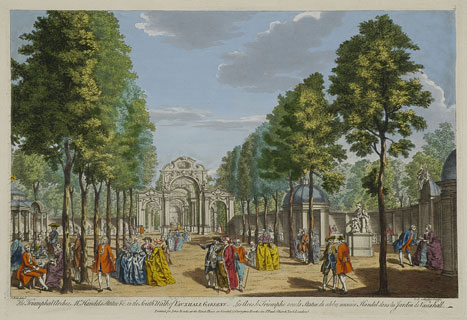 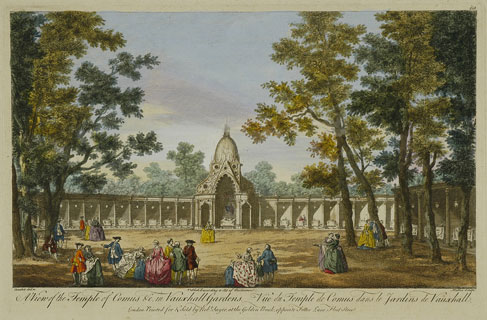 This engraving was made after an oil painting by the Italian painter Canaletto. It shows one of the structures added by Tyers to the gardens, the Temple of Comus, a reference to the poet John Milton, whose sculpted likeness, “seated on a Rock; and in an Attitude listening to soft Music,” was positioned nearby. The temple would also have conjured associations with Thomas Arne’s opera of the same name, which was first performed at the Drury Lane theater in 1738. Comus was Arne’s first great success as a composer; the libretto was adapted by Richard Dalton from Milton’s masque of 1634, and Arne’s music was imitated by George Frideric Handel in his Milton oratorio, L’Allegro, il Penseroso ed il Moderato, written two years later. Arne was one of the leaders of musical life in London in the 1740s and had a long association with Vauxhall, publishing several books of his songs performed there.

The prominence of family groups in this view was perhaps intended to counter Vauxhall’s reputation as a place of assignations.