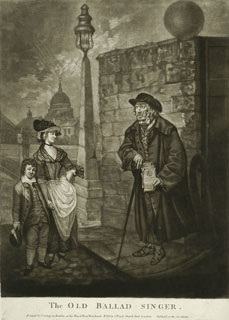 Ballad sellers were stereotyped in the eighteenth century as impoverished, uneducated and morally lacking — they were said to collude with pickpockets, distracting listeners with their songs while the pickpockets went to work, afterwards sharing their takings. These prints show a more sympathetic and dignified view of the ballad seller, perhaps in part due to the rise of the ballad itself from the lowest in the hierarchy of vocal music to a more valued form during the century.