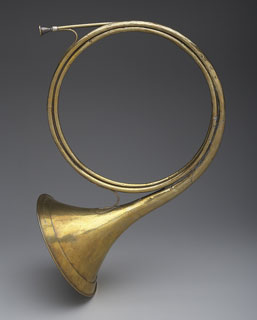 The hunting horn (or trompe de chasse) first took on the familiar hoop shape in seventeenth-century France. Although its main role was a practical one in the hunting field, the instrument was used in compositions by Jean-Baptiste Lully as early as 1664. During the eighteenth century the horn began to appear regularly in instrumental ensembles and even as a solo instrument, despite being able to play only a restricted range of notes. Virtuoso players avoided this limitation by stopping the flared bell of the horn with a cupped hand, creating changes in pitch and attaining the missing notes.

With its noble and forceful tone, the horn played an important role in outdoor music making, and it makes frequent appearances in depictions of the orchestra at Vauxhall Gardens. Handel’s Music for the Royal Fireworks of 1748 included parts for three horns and three trumpets, although at the original performance many players were assigned to each part, creating a sonority of remarkable grandeur.

In the mid-nineteenth century, the valve horn was widely adopted, with keys allowing the hornist to play all the notes of the scale without hand stopping. This in turn allowed Romantic composers such as Wagner, Strauss, and Elgar to write more complex chromatic passages for the horn.

LENT BY THE YALE UNIVERSITY COLLECTION OF MUSICAL INSTRUMENTS