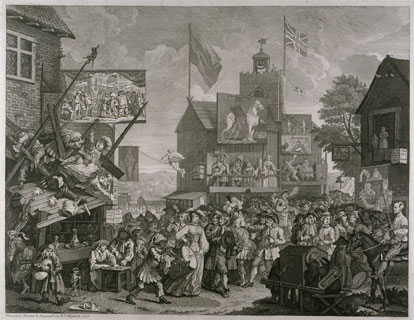 Henry Fielding, writing in 1742 in praise of Vauxhall as a place of elegant entertainment, contrasted it with the Fairs that were held at the “Extremities of the Town,” where “the Spectators are entertain’d with a Medley of Vaulting, Tumbling, Rope-dancing, Singing, and sometimes Farces, and regale themselves, in the Interval, with Eating, Drinking, Smoaking, or making Love to the Ladies of Pleasure, whence you will easily gather that the old, social, sensual, unpolish’d frolic Turn of the English is here seen to its full Perfection.” Hogarth published Southwark Fair with A Rake’s Progress,both warning against the dangers of acting and of imitation (note the collapsing stage at the left of the print). Here Hogarth illustrates a range of human vices among the common people, employing “low” musical instruments, such as bagpipes and a hurdy-gurdy, to suggest both the cacophony of the fair and its popular character.