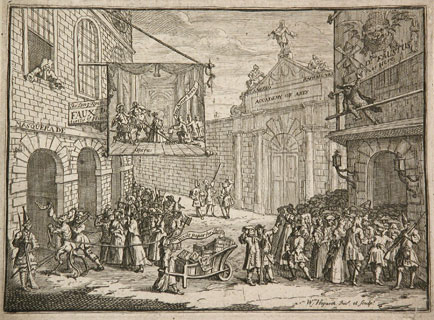 Hogarth’s first self-published satirical engraving attacks “foreign taste” in high and low culture. On the right, a crowd lines up to see a pantomime, Dr. Faustus, at the Lincoln’s Inn Fields theater (where John Rich would later stage The Beggar’s Opera), while on the left a crowd is drawn into the Haymarket Opera House by a jester and a devil. The signboard for the opera is based on a contemporary print depicting a performance of Handel’s opera Flavio, which has here been altered to show a nobleman pouring out money at the feet of visiting Italian singers. In the foreground, a woman pushes a handcart loaded with “waste paper” consisting of works by distinguished English writers including Congreve, Dryden, Addison, and Shakespeare.

LENT BY THE LEWIS WALPOLE LIBRARY