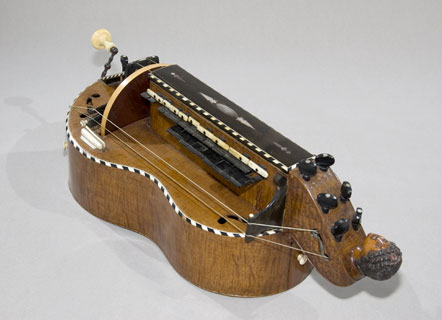 The hurdy-gurdy was first used to accompany choral singing in churches in the middle ages, but by the eighteenth century it was mainly associated with street musicians. The instrument has a unique, rather acid tone, sometimes used by eighteenth-century composers to evoke the rustic world. Generally, however, the hurdy-gurdy carried connotations of crudeness and disharmony, as it does in Hogarth’s engraving The Enraged Musician.

The hurdy-gurdy is played by turning a crank with the right hand, which turns a wooden wheel mounted within the instrument. A continuous bagpipe-like tone is made as this wheel vibrates four of the six strings, which are known as the drone strings. The player’s left hand produces the melody by pressing sliding keys, which cause the two melody strings, or chanterelles, to be shortened and therefore to increase in pitch. In this example, the upper row of 22 keys controls the right string, the lower row of 10 keys controls the left string, yielding a melodic range of two octaves. This superb early nineteenth-century hurdy-gurdy bears a label, “John R Vincent Maker. Stonington, CT, March 1832.” Vincent may in fact have been a dealer who pasted his labels into imported, perhaps French, instruments.

LENT BY THE YALE UNIVERSITY COLLECTION OF MUSICAL INSTRUMENTS