Home » Aspiring to the Condition of Music » Art for Art's Sake 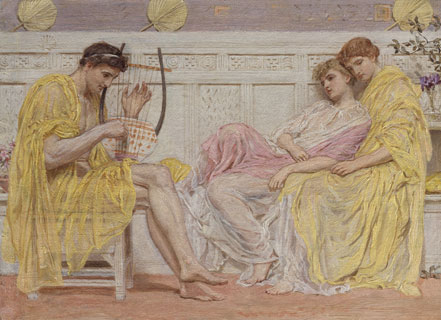 A close friend of Whistler, Albert Moore was one of the leading painters of the Aesthetic Movement. The relationship of art and music was particularly important to Moore, himself a keen amateur musician who admired Handel and Bach as well as more modern composers. In A Musician two young women are entranced by the beautiful sounds emanating from the musician’s lyre. Their enervated, melancholy state suggests aesthetic ecstasy — exactly the effect that artists like Moore wanted their works to evoke in the viewer, and that Gilbert and Sullivan parody in Patience.

The painting uses areas of subtly related coloring to provide an equivalent of the harmonic relations of notes in a chord; yellow, pink, flesh tones, and cream are blended and juxtaposed. The critic F.G. Stephens described the painting as “a sort of pictorial music drawn as from a lyre of but few strings.”

Although Moore’s work seems to be a historical scene set in antiquity (and is, indeed, based on a Roman wall painting from Herculaneum that the artist had studied in the British Museum), the presence of Japanese fans and distinctly unclassical wall decoration and furnishings makes it clear that the composition is a fantasy, an amalgam of beautiful elements from multiple periods and settings. The following year, Moore exhibited a successor to A Musician, the large canvas A Quartet: A Painter’s Tribute to the Art of Music, AD 1868, in which paradoxes are even more apparent. Four male figures clad in classical draperies and with trance-like expressions are seen playing the instruments of a modern string quartet, listened to by three maidens in Greek attire.