Home » Aspiring to the Condition of Music » Aesthetic Satires 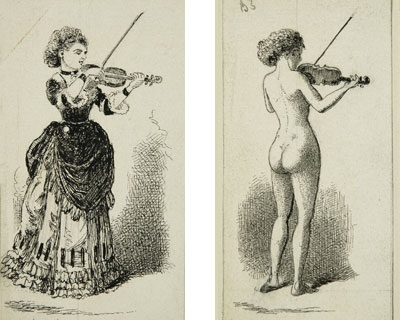 George Augustus Sala was a journalist, novelist, and man-about-town who cultivated a raffish, bohemian air. Mainly known as a writer, he was also a capable illustrator. Presumably made for his own amusement or that of a male friend, this curious object makes explicit the connection between music and the erotic alluded to in so much art and literature of the Aesthetic Movement. On the outer leaf, a respectable, crinoline-wearing lady violinist is seen; but on opening the folded paper, one finds an image of the same woman, naked but for the violin. Similar, mildly pornographic images were recently rediscovered among the possessions of the Punch illustrator Edward Linley Sambourne, who was a member of Sala’s circle. Sala’s images cheekily reverse the common practice of academic artists of the period, in which a model for a figure in a painting would first be sketched nude in order to observe the anatomy correctly, and only later, in versions for public exhibition, would the clothing be added.